Lots of my blogging friends have been doing this survey this week, so I thought it would be fun to play along. I’ve not been tagged by anyone, but I’m still going to go along with the fun!

Four names that people call me, other than my real name:

Four jobs I have had:

Four places I have lived:

Four places I have been:

Four of my favorite foods:

Four TV shows that I watch:

Four things I am looking forward to this next year:

I’m not going to tag specific people because I really have no clue who reads my blog, but if you do read my blog and want to play along, please do so!!

Have a great weekend everyone!

We arrived in Washington, D.C., on Friday afternoon and took the Metro from the airport to our hotel. We got checked in and decided to head to the Expo that evening instead of having to rush Saturday morning. It was super fast getting through packet and shirt pick up and then we headed to check out all the vendors. It was fun seeing everything, and stopping to chat at a few booths. Ryan stopped to talk to some people that provide PTSD dogs and got some info from them. I stopped and chatted at the Nuun booth and got to meet one of my fellow Nuun ambassadors. Then I met my fellow Generation UCAN Ambassador Gary who was working at The Stick booth. It was nice meeting him in person finally and chatting with him for a little bit. And then I finally got to meet Varun, one of the head guys at GenUCAN!! He hooked me up with a few samples of UCAN’s new hydration/electrolyte mix and even gave Ryan a shaker bottle. It was really nice meeting him finally after being an ambassador for the company for a year and a half now (and yes, I’m still am ambassador for them). I’m sad that I didn’t get any pictures at the expo, especially of my Nuun peeps, Gary, and Varun, but my phone was dead.

So we finished up at the expo just as they were closing and headed back to our hotel. Thankfully there was a Subway right as we got off the Metro, so we grabbed dinner on our way. We also stopped at a Giant grocery store (the name was Giant, but it also reflected the size) and got a few things for the room.

Saturday morning I did my 2 mile shakeout run on the hotel treadmill and then we headed down to the restaurant at the hotel for breakfast before heading to the Pentagon for the Kids’ Mile races. Robert was in the last heat and we got there in plenty of time (unlike some other families). He ended up lining up near the back, but finished near the middle of the pack! I got some pictures from that, but I’ll save them for another blog post. After chilling in the hotel room for a while, we headed out again to go to the Team RWB pasta dinner, sponsored by the DC chapter of RWB. We kind of went the wrong way when we got off the Metro, despite having a map and directions, and we ended up walking well over a mile more than we needed to and through a rather sketchy part of town, but we eventually found the place and had a great dinner of all kinds of pasta and pizza. We figured out the right way to get back to the Metro and it turned out to only be maybe a half mile walk. Oops! After we got back to the hotel, I laid out all my gear and took my “Flat Lani” picture (yes, I really used just about all of that pictured) and then we headed to the hotel pool for a little while. And then it was time for bed.

My alarm went off at 4:30 and I headed to the bathroom to get ready – that’s my usual getting ready spot so as to not wake up the guys. I had my English muffin with peanut butter, mixed up my UCAN (2 packets for before and 2 packets mixed into a gel put into 3 gel pouches for during), and got ready to go. I dropped my Nuun tablets (all 4 of them!) into my hydration pack, double checked to make sure I had everything and headed out. I stopped at the ice machine to fill the hydration pack and then the bathroom in the lobby for water and then headed to the Metro. Holy crowded!! And it was even worse when we got to the Pentagon stop and EVERYONE was trying to get out. Metro rides really should be free on race mornings and then we wouldn’t have to worry about the turnstiles. I ended up missing the Team RWB group photo because of the backup at the metro, the long walk to the start area, and security getting into the start area. I basically had time to check my bag, hit the port-a-potty, grab a selfie and head to the start. 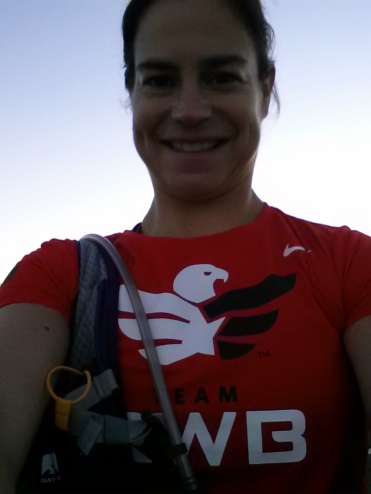 While walking to the start, I was able to grab a picture of the skydivers bringing in the American flag (a 7800 square foot one!!!). This was actually a tandem and one of the skydivers was Medal of Honor recipient Kyle Carpenter (not only did he jump in with the flag, but he went on to run the marathon and finished in 5 hours and 12 minutes!). 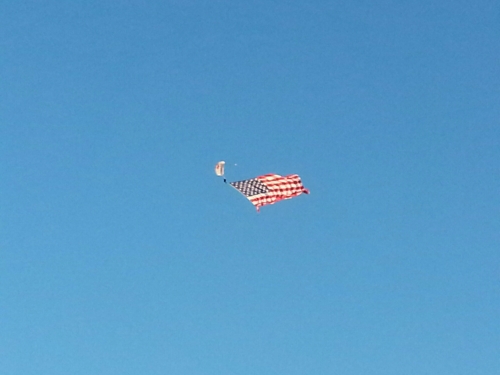 They also had some Marine Corps Ospreys fly over during the start, so I grabbed a quick picture of them before I shut my phone off to save the battery for after the race. 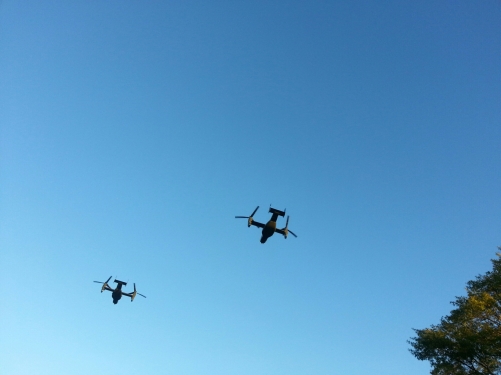 The first 5 miles were a lot hillier than I expected. I had looked at the course profile, but the elevations didn’t register. The Army 10 Miler is pretty flat, and I was kind of basing my expectations off that. Bad idea. At least it prevented a too-fast start. For what it was worth. . .  I felt pretty good for the first half of the race and was on pace for a PR. And then the wheels fell off. Hitting a wall at mile 13 of a marathon?? Huh?? What kept me going was knowing that I would see my guys along the Mall. There was a long stretch (a couple of miles maybe? Everything kind of ran together for most of the race.) where there was a motivational sign every few feet. It was fun reading all of them. And then we got to the Mall and there were my guys – on the side opposite where I expected them. That was a wonderful surprise seeing them there! I got some hugs and some encouragement from them and headed toward the Capitol building and around to the Carousel side of the Mall where I knew I’d see my guys again. I passed off my empty gel pouches to them, got more hugs and encouragement and headed off again. I already knew at that point (maybe mile 17 or 18?) that a PR wasn’t going to happen, but I was bound and determined to finish no matter what. I was reduced to walking lots and lots at at time – some of my splits were in the 19 minute per mile range. I did, however, “Beat the Bridge” and finally got a second wind about mile 25.5 or so and I was able to finish strong (at least strong compared to what I had been doing). The final hill to Iwo Jima was a lot steeper than I expected, but I charged right up that hill and crossed the finish line!

Here’s a picture that I had another finisher take with my phone while I was waiting in line for the official photos.

Here’s my official finisher’s photo (I bought all my pics in digital version, so they’re mine to use as I like). 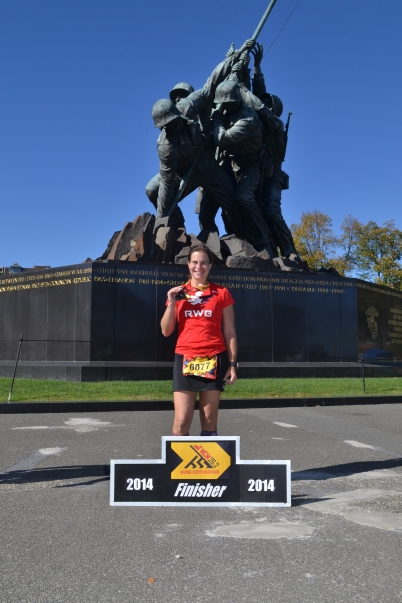 The Iwo Jima Monument actually does have a flag on it. 🙂

Here’s my Garmin time – official time was 5:50:49. And yes, it was 26.7 miles – the extra half mile came from not being able to run the tangents and weaving around people. It’s all good. Despite it being over an hour slower than my goal time of 4:30-4:40, it was still my 2nd fastest marathon. There’s always next time for a PR. It just wasn’t my day. Here are my splits:

After the race, I got my medal from a Marine and my goodie box with food (nothing much I wanted to eat in there) and a bottle of water. I stopped and sat on a pile of pallets with a fellow Team RWB Eagle – he actually helped me sit down because I was about to fall down. After sitting for a while, I felt better and went off to find my guys. They were easy to find with their RWB shirts on, and we walked through the rest of the finishers area together. I got my “jacket” – a paper-ish/cloth-y zip up jacket with a hood. It was actually pretty nice and definitely helped keep me warm after! We finally found the baggage trucks and got my bag and headed to the Metro to head back to the hotel. It was a long wait, but a well-maintained line to get there. Once back to the hotel, I took the boys to the pool for a bit. They played and I sat on the steps with my legs in the cool water. I would have loved to have taken a cool and/or epsom salt bath, but our bathtub drain stopper wasn’t working. The pool worked. After about 1/2 hour or so, we headed back to the room. I grabbed a nice warm shower, put my compression sleeves back on (clean ones, though), and we headed out to go to the Silver Diner for dinner. We had heard a lot of good stuff about them and they were one of the race sponsors, so we figured we’d check it out. It was about a half hour Metro ride, but I managed to keep my feet up while we were on the train.

We finally arrived at the right Metro stop and after a short walk, we were there! It was a very short wait for a table and it was definitely worth the Metro ride and wait for a table! I ordered a burger with mushrooms and Swiss on it, fries, and a local craft beer!! It was all delicious. 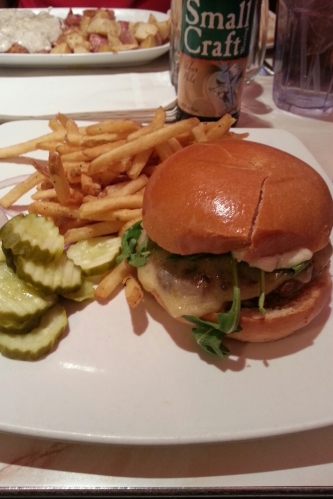 After we ate, we made our way back to our hotel and headed to bed. I definitely slept good!! I’ll leave you with a picture of me wearing my shirt and my medal.