Last Monday, 20 January, my sweet kitty Callie crossed over the Rainbow Bridge. We spent the weekend prior worried about her because she was really lethargic, and I was able to get her into our vet Monday morning. The vet ran some lab work on her and determined that she probably had pancreatic cancer that had spread and that her kidneys had all but shut down. I had already made the decision to do the humane thing, but I called Ryan for moral support. Near the end of our conversation, Callie started gasping for air and after I had hung up with Ryan and was waiting for the vet to come back in, Callie breathed her last at 9:58 a.m. I’m thankful that I was able to be with her, cuddling and petting and talking to her when she crossed the Rainbow Bridge. Callie was a great companion, and I had had her since the day she was born. She would have been 15 in March and I know she lived a good life. We opted to have her cremated so that she will always be with us.
I’ll leave you with some pictures of my pretty girl – these are all from the last year or so. I’ll try and find one of her “baby” pictures and I’ll share that along with a picture of her urn when we get it back. 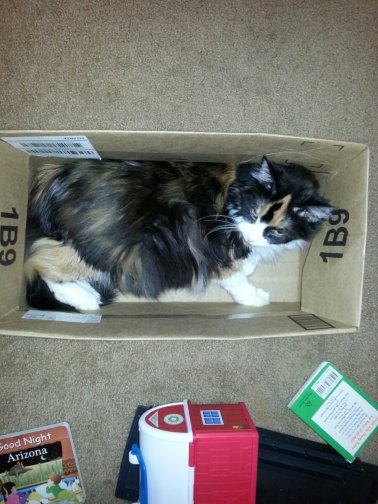 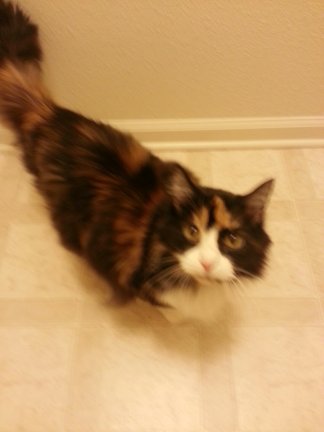 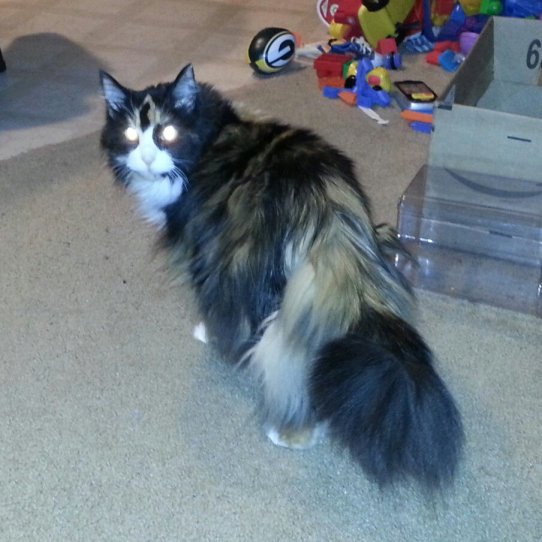 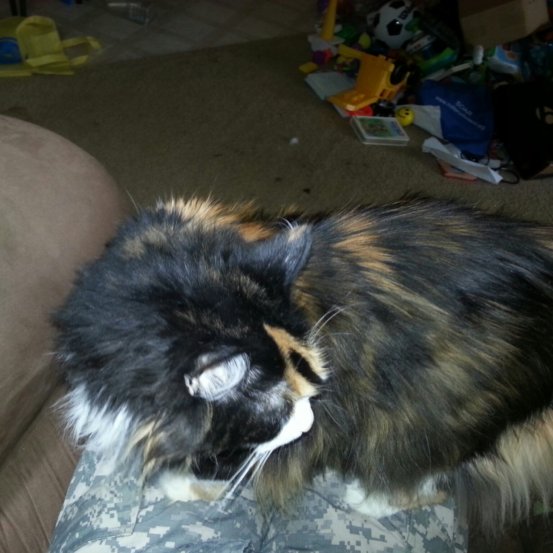 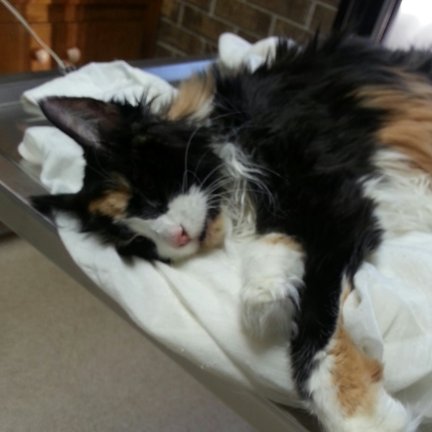 I’d liked to introduce you to the newest member of our family – our new kitten, Cricket! We adopted her yesterday from the stray shelter here on Fort Rucker. She was found in the parking lot of the PX around the beginning of December. Ryan first met her just before we went on Christmas leave and fell in love with her. We decided that if she hadn’t been adopted yet when we got back from leave, we would make her a part of our family. Well, we got back from Michigan, and Cricket was still available and now she’s part of our family!

Cricket was born without a tail so she has this cute little nubbie where her tail should be. She’s having a lot of fun exploring our house and finding places to hide. She and Callie are working to establish the hierarchy (which of course Callie will (should) come out dominant). Cricket will go toward Callie, Callie hisses at Cricket and then Cricket makes a hasty retreat, only to try again a few minutes later.

I’ll leave you with a few pics of our new little girl! 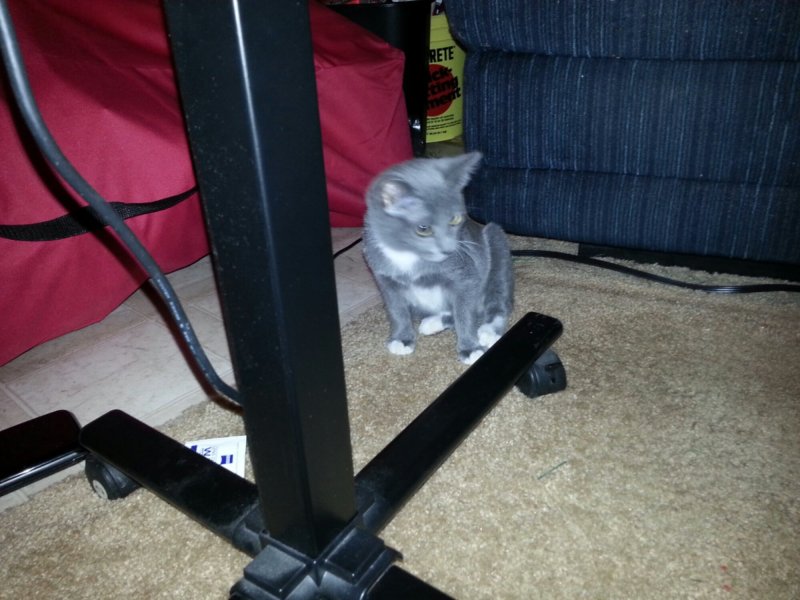 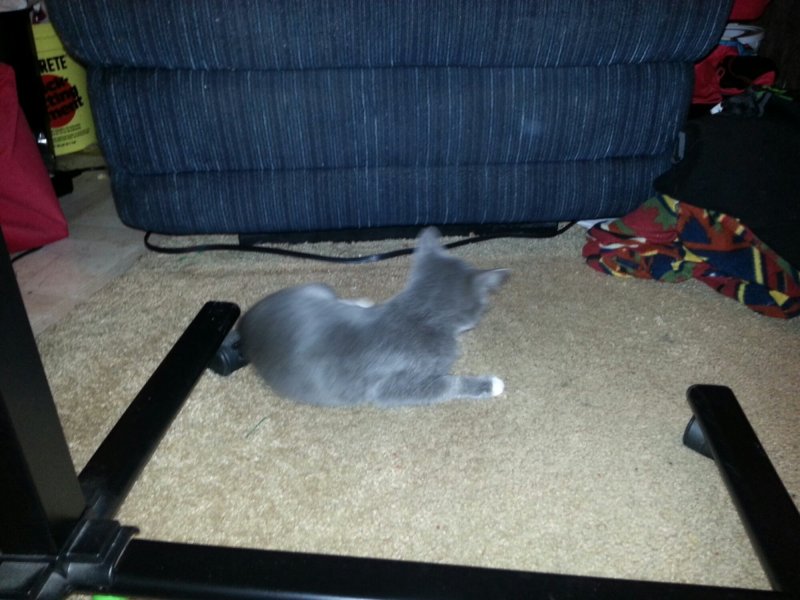 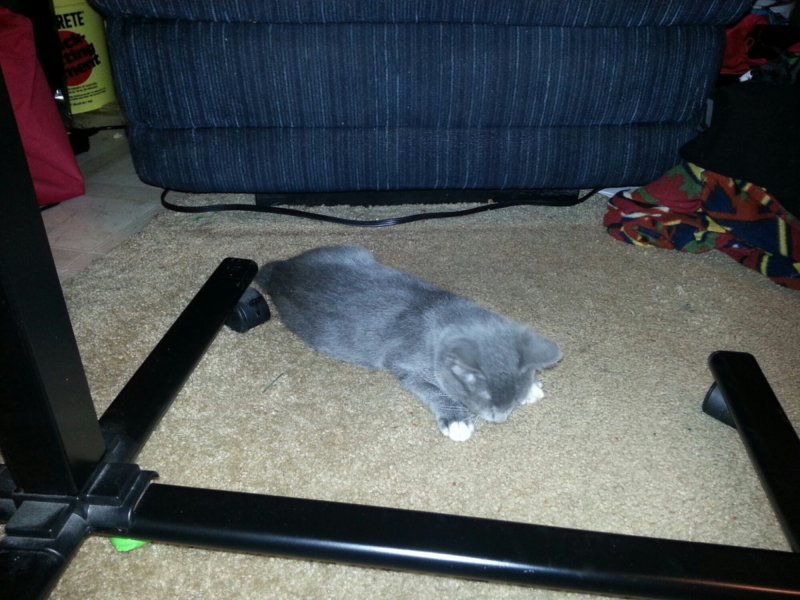 I got this from my friend Cori at OliveToRun and thought it would be fun to answer the questions!!

#4. Would you rather have a baked good for dessert or an extra serving of your favorite entree?
I’ll take the baked good, please!

#7. Would you rather have a rest day on a work day or a day off?
I’d rather have it on a work day. Sure, I’d be a little sluggish at work without a workout, but at least I’d still be doing something other than sitting on the couch doing nothing.

#9. Would you rather spend your money on running gadgets [HRM, GPS watch, Headphones] or running shoes?
Um. . . Both??

#10. Would you rather run in a relay or do the run portion of a distance triathlon?
Definitely a relay!!

Interesting Beginning to the end of Vacation

We got the rental car all loaded up this morning – suitcases, computer bags, kids, adults, and 4 boxes. After a quick stop at Family Dollar to get a new magna-doodle for Thomas, we stopped at the post office to mail the 4 boxes to AL. That’s the one downside of flying instead of driving, but it’s definitely worth it. We made great time to the Milwaukee Airport and even had time for a long lunch stop at a McDonald’s just south of Green Bay – the kids had a great time playing in the play area! We got our rental car turned in and all the luggage loaded up on a cart and headed to the terminal only to find out that our flight to Atlanta had been cancelled due to weather in Atlanta. Boo. But the lady at the counter was super nice and she got us booked on a flight fairly early tomorrow morning and even gave us a coupon for a discount at a local hotel. After getting everything squared away for our flight tomorrow, I called the hotel and made a reservation. They sent their shuttle driver and he was super nice as well. He told us to just get into the van out of the cold and wind and he took care of all the bags and returned the luggage cart. It was a 5 minute drive to the hotel and thankfully they have a restaurant on-site so we didn’t have to worry about how we would get dinner. And we got coupons for free drinks with dinner, so I had a glass of wine with my chef salad. It was a good dinner and we have comfy beds in our room. We had planned on spending the night in a hotel tonight anyway, but in Atlanta. The only downside is that our hotel in Atlanta was a pre-paid one and so we’re out that money plus that cost of this hotel, but it’s all good. We can’t help that there was bad weather in Atlanta. We’ll just have to drive home after flying tomorrow, but it’ll be ok.

Happy 2014!! I hope your year is off to a great start! Here are some of my fitness and running goals for the coming year:

— My goal is not to run 2014 miles, but 2014 kilometers which equals roughly 1250 miles – definitely doable for me with marathon training and training for the 2015 Disney World Dopey Challenge.
— Along with this goes training smartly so that I don't get injured again and earn a new marathon PR at the Marine Corps Marathon in October (and hopefully a sub-5 hour marathon as well)!

— Complete 14 races in 2014. So far I have 10 on my tentative schedule. I'm not registered for any, although I did defer the Marine Corps Marathon from last year, so that's a given.

— My goal is to complete all 90 days of P90x3!
I'llbe starting P90x3 on Monday (6 Jan)!! If you'd like to order your own copy of P90x3 and join me in getting fit, check out my BeachBody page! Yes, I'm a BeachBody Coach and you can order all your favorite workout videos and Shakeology from me.

— continue to be the best #UCAN Ambassador I can

— be the best Nuun Ambassador I can

And my focus word for the year is
CONSISTENT
I need to be more consistent in my eating (and not consistent with the bad stuff) and my fitness.