Hmm. I guess my medal a day for all of March didn’t work out so well, but I still want to share the rest of my medals with you, so I’ll do a few a day for the next few days. 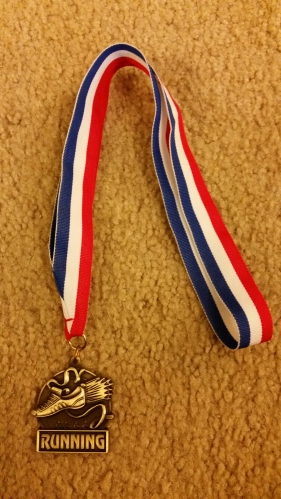 This was a small local race to support a local high school cross country team. I’m all about supporting local sports teams, so despite the heat and humidity (end of July in Alabama, anyone?), I headed out to run. I was pleasantly surprised at placing 2nd in my age group, so that was a nice bonus!

Year number 2 running this! Half marathon #10. I was suffering from what I thought was knee pain leading up to this race, and my doc gave me the ok to double up on the pain meds I was taking so I could get through the race. I was actually on pace for a PR until about mile 11 when the pain hit full force. I managed to finish and went back to the doc on Monday after. She sent me for x-rays and an MRI and it turned out that I had a stress fracture in my upper tibia. AACK!!! 7 1/2 weeks of no running after this, but at least I could cross train to my hearts content, so I got a LOT of bike riding and swimming in during that time.

I was a lot more prepared for this bike ride than I was for the El Tour de Tuscon in 2010. I had actually done two 25 mile rides prior to this – a stand-alone ride and my Olympic triathlon, so I felt very comfortable with the distance. I’m awed by those that completed both the metric century (62 miles) and century (100 miles) rides. Someday. . .

I ran this mud run with several of my coworkers and a wife. There were 6 of us and we ended up breaking into 2 groups of 3. I wanted to stay with my Soldier and his wife since this was their first time doing an obstacle course run of any kind. The first half was a lot of fun – lots of mud and fun obstacles. The second half had a LOT of running and no obstacles. And the course was about 2 miles longer than advertised, so it made for a really tough day (especially after having marched a parade that morning). We were all glad to be done and be able to go get some food.

This was my second year running this, so I knew that it was a murky/seaweed-y swim with a hilly bike and run. It was also HOT – 72 degrees at race start and it was almost 80 by the time I finished. But due to better training, I was able to better my times in all 3 events and both transitions from the year previous. I also secured a 3rd place finish in my age group, and that was a nice surprise! The preliminary results were showing me in 4th. Again. I was pretty excited when they called my name for 3rd!

Come back tomorrow to see 4 more of my medals! 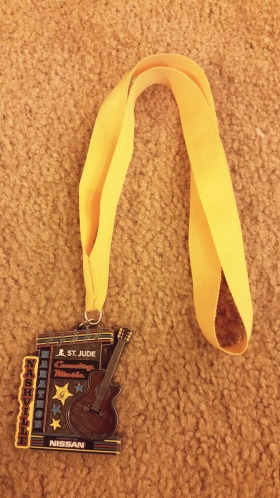 Marathon #4. I set a huge new PR at this race, taking my 6:24 down to 5:06:24. It was an awesome hilly but rainy race. It rained for the first 4 hours and I figured I was already soaked, so I might as well have some fun! I splashed through puddles, “flew” like an airplane around corners, and generally just acted like a kid. This PR still stands, but WILL be going down in my fall marathon this year.

Hi again! Here are another 3 days of my medals!

Half marathon #8 and my first race in Alabama. It was really fun running ON a NASCAR race track! Part of the race was around the parking area, but the majority of the race was on the track itself, around the grand stands, and across the infield! Post race party was in the garage area! 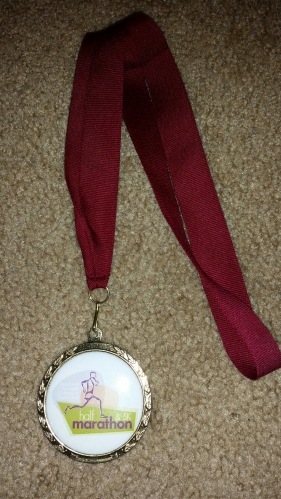 Half marathon #8 came just a week after my 5K PR and this race ended up being a new PR as well! It was an accidental PR on a super hilly course – I had just planned this to be a training ruin with support and a medal for my upcoming marathon. But by mile 10 I had figured out that if I maintained my current pace, I would PR. Once that thought is in a runner’s mind, it’s pretty much going to happen. My time was 2:14:03.

Check back soon for more medals!

Hi again, everyone! I’ve missed a few days with my move to Missouri (more on that soon), so I’ll give you 3 days here. Enjoy!

OK, so this should have been #7 and Warrior Dash should have been #8,but oh well! This was my first relay and was an amazing experience! My best friend Kristin was the only other person I knew on the 12 person team, although we became great friends with the others the few weeks before the race and during the race! I ran 3 legs over the course of 200 miles. My legs totaled about 15 or so miles. The only downside was that I had a sinus infection and was feeling pretty miserable most of the time. Of course, my meds helped me get more sleep than the rest of the team, so there was that. Oh, and I was about 10 or 11 weeks pregnant at the time and we hadn’t officially announced our  pregnancy to anyone including family yet, so my Ragnar team was among the first to know! (Sorry mom and dad) 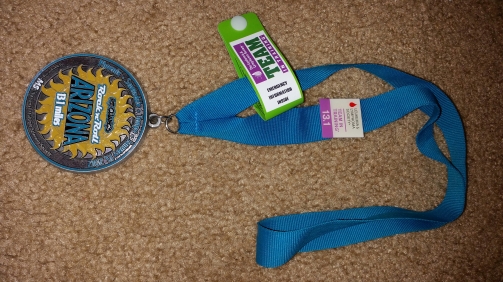 This was my first post-Thomas half marathon – he was not quite 4 months old! I ran as a member of Team in Training and the support from the coaches and other Team members along the way was awesome! Finished in 2:33:08, only 9 minutes shy of my PR at the time. 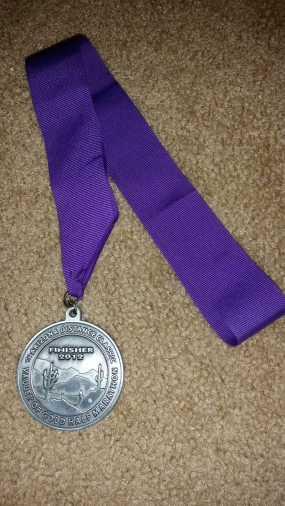 Thomas was 6 months old for this one. It was a very hilly course, but I had a great time and I enjoyed the beautiful views in Tucson. Like always on hills, I passed a lot of people during the climbs!

Be sure and come back tomorrow to see what’s next! 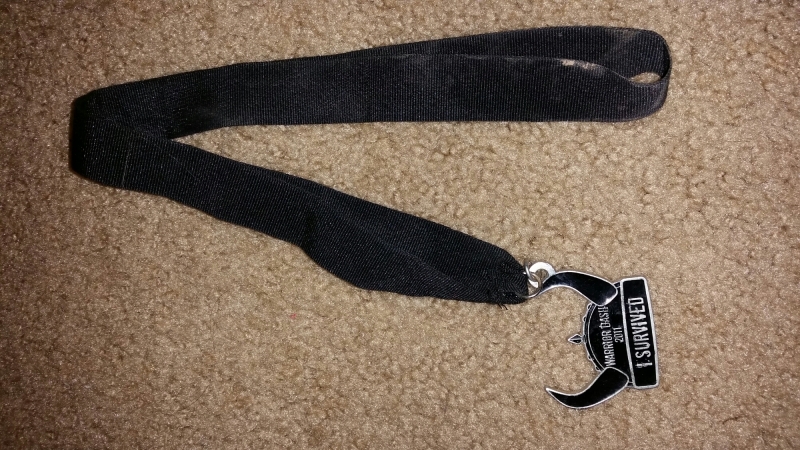 Ryan did this race with me! I was also 4 months pregnant with Thomas. It was a lot of fun, especially running it with Ryan. I got some looks with my prego belly, but I had cleared it through my midwife and I took it easy and was careful with the obstacles.

Since I had to pack up all my medals for our move, I thought that I’d showcase one each day through the month of March. In typical Lani fashion, I’ve already managed to get to the 6th of the month without a post, so you’ll get 6 days off the bat.

My first half marathon. Training for this was interesting since I lived on a base that was only about 4-5 miles around the perimeter. I ran the perimeter a lot, and I also spent a lot of time on the treadmill in the gym. My First Sergeant ran most of the race with me, but left me around mile 10 or 11. I finished in about 2:25 – not bad for a first half. 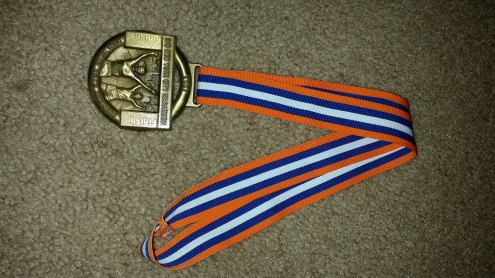 My first marathon! Yes, there really was 4 1/2 years between my first 2 major races. Running NYC was an amazing experience, and I had the added fun of running as a member of Fred’s Team. However, the excitement of the BIG race atmosphere got a hold of me and my anticipated 5 1/2 hour finish ended up being 6:35. I got too caught up in the excitement and forgot about my planned walk breaks until an hour and a half in and it made for a very long day.

This was an interesting race. My parents and brother came with along with my husband and son (just had 1 at the time) to watch and cheer me on. We had figured out several places along the course where they could see me, but the weather had other plans. It was around 32 degrees and was precipitating – a combination of snow, sleet and rain, or as I call it, precipi-yuck. The family stayed in the vehicle the whole time, although my husband did venture out with our son to a nearby fire station to see the fire trucks. On a positive note, although chilly, it was nice weather for the kids’ race the day prior and my Big Kid ran his first race there!

There was a race on post the same day as this one and that race would have been free, but I chose to pay to run the one in town because it was closer and started an hour earlier which fit into my schedule better. I ran a decent race and was surprised to find out that I had placed 3rd in my age group! 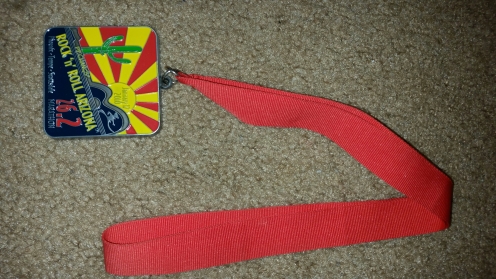 Marathon #2. I didn’t really train well for this – my longest run was a whopping 13 miles 2 weeks before the race. But I finished and with a new PR – 6:25. The best part about this race was finally getting to meet my friend Sara in person! Her training had gone really well and we decided to not run together as originally planned. I’m thankful for that decision as she qualified for Boston during this race!

My first bike race, and the farthest I’ve ever ridden. Rode with my best friend, Kristin. We had an interesting and challenging 40 miles – I had a flat not even 2 miles in and at about mile 17 or 18 one of her pedals decided to disconnect itself from the bike. With course support help, we were able to get it fixed enough that we could finish.

Check back tomorrow to see which race is next!

Lots of my blogging friends have been doing this survey this week, so I thought it would be fun to play along. I’ve not been tagged by anyone, but I’m still going to go along with the fun!

Four names that people call me, other than my real name:

Four jobs I have had:

Four places I have lived:

Four places I have been:

Four of my favorite foods:

Four TV shows that I watch:

Four things I am looking forward to this next year:

I’m not going to tag specific people because I really have no clue who reads my blog, but if you do read my blog and want to play along, please do so!!

Have a great weekend everyone!

armytbonegirl
Create a free website or blog at WordPress.com.